This blogpost is stimulated by two bits of reading matter of very different sorts, but between them they have taken my thoughts in somewhat multifarious directions. Apologies if the net result is a slightly disorganised and diverse post.

It started with an article in the Guardian about architecture, and how a group of women in the 1980s got fed up with the idea – originating with modernist Le Corbusier that “In English detective novels the good-looking men, such as policemen, are always 6ft tall!” – that a strapping, tall male was the default person living in modern buildings and hence used as the basis for design. Consequently, buildings were not planned for the average woman, certainly not one with a pram, let alone a wheelchair user. A woman’s collective – Matrix Open – was set up back then to try to counter this presumption about appropriate building design. Much more recently, Caroline Criado Perez, has spelled out in a huge variety of situations just how the default man still exists in designers’ and policy-makers’ thoughts, to the detriment of at least half the population, in her book Invisible Women. Stamford professor Londa Schiebinger, on the Gendered Innovations website she curates, looks at the damage such male-by-default assumptions cause in the STEM domains, research and design.

Thinking about that led me into thinking about my home department of the Cavendish Laboratory. The current building predates this push back against buildings designed for strong, muscular men, but of course nearly all the inhabitants at the time of its opening in 1974 would have been male. I was in the first cohort of final year undergraduates to be taught in the ‘New Cavendish’ as it has always been known (the original building in Free School Lane dates back to 1874 when James Clerk Maxwell was the first Cavendish Professor) in the academic year 1974-5. 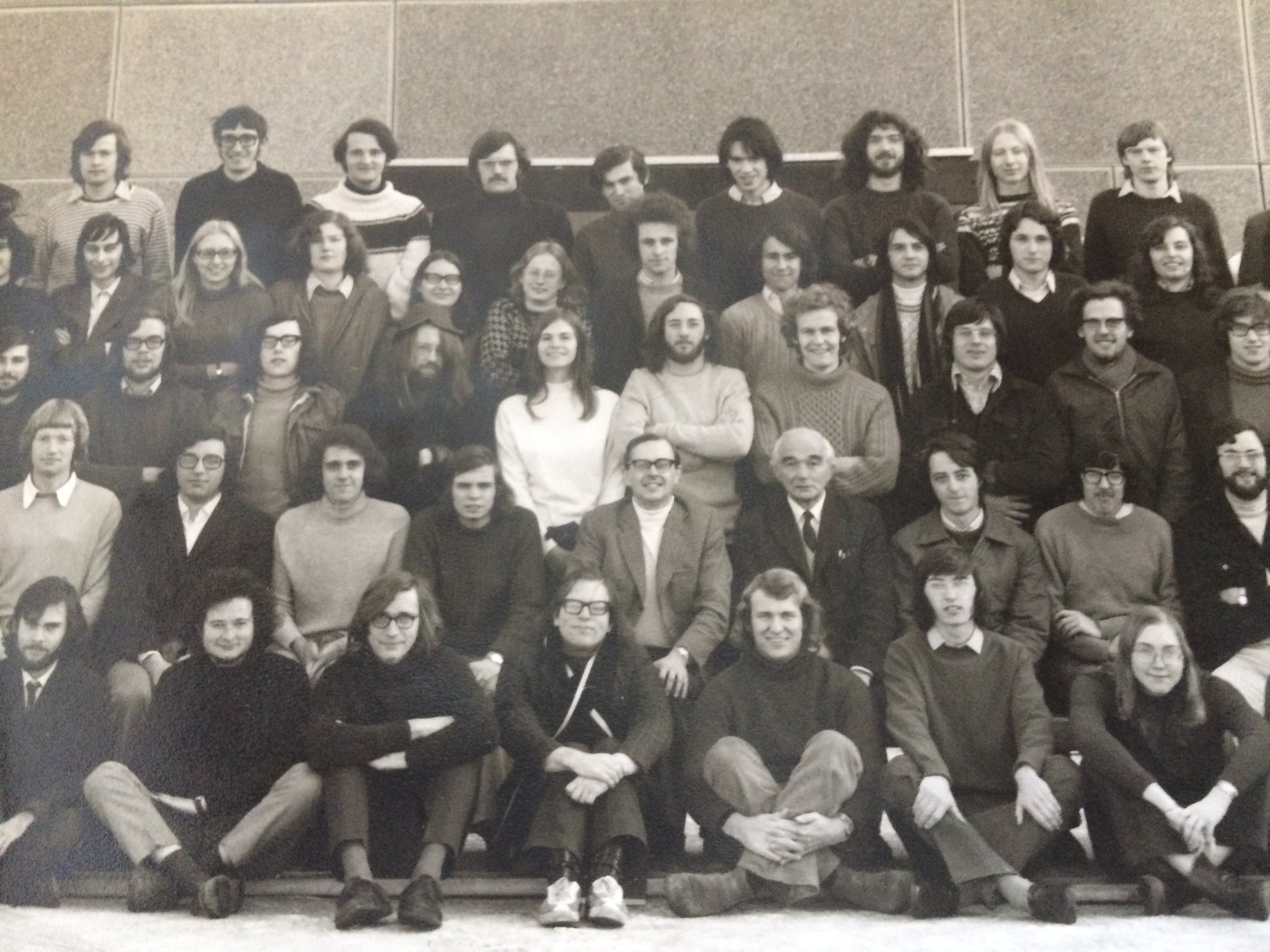 The photograph shows part of my Part II (third year, in Cambridge parlance) cohort of students. In the centre sits Sir Brian Pippard, the Cavendish Professor of the day, who had masterminded the new building and who had a very firm grip on everything that went on in the building, including how the teaching should be done. A couple of rows behind, you can see a line of four young women, with a fifth in front of me (in case that helps to identify the young me). This group of four represent four of the five of us from Girton, all four staying close to physics during our careers; the fifth was obviously having a lie-in and can’t be seen anywhere. Us Girtonians (still a woman-only College at the time) are flanked by two men who both went on to become FRSs. There are two other FRSs visible in this image too; outside this field of view are a couple of other women out of a total class of around 80 but not, as far as I know, any more FRSs. (Feel free to guess who the four male FRSs are, if the image is not too grainy to make them out.) Additionally, also in the field of view, was someone I next met when we were both Trustees of the Science Museum (he’d gone on to do Part III maths). I like to think we were a strong cohort. 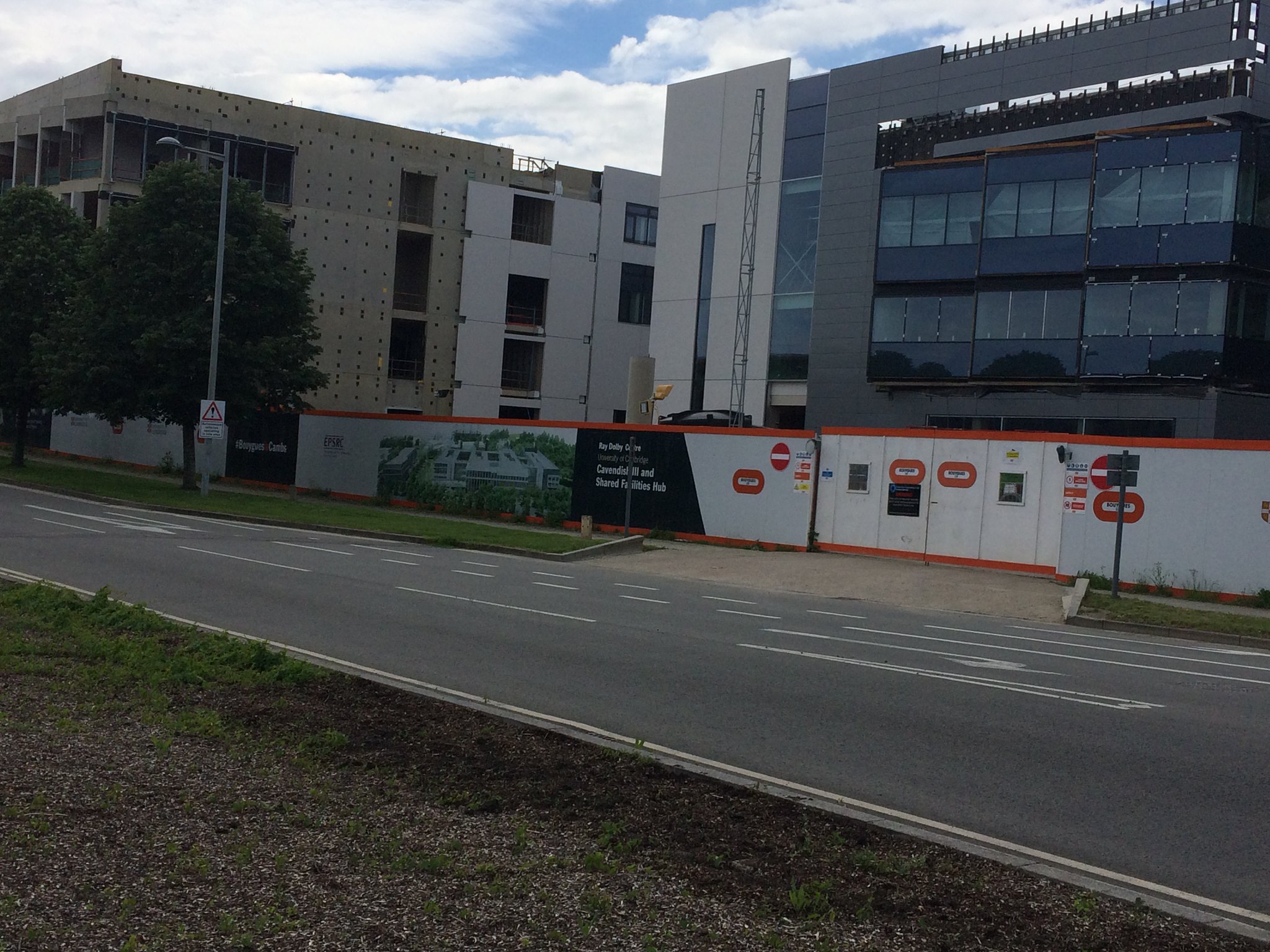 Whereas the first Cavendish building – the ‘Old Cavendish’ – is still standing, although not used for physics any more, the lifetime of the New Cavendish seems limited. Cavendish III – to be known as the Ray Dolby Centre – is currently under construction, as shown above, after which I think the New Cavendish will be knocked down and the site redeveloped. I doubt the new buildings have been designed with parents with prams in mind, but I hope the architects have factored in the wheelchair user and other people who may not possess a handsome policeman’s physique. The New Cavendish itself was built not to last. Pippard seems deliberately to have gone for a cheap (though not particularly cheerful) design, so that the square meterage could be as large as possible. White breeze block walls and wide corridors, for ease of moving equipment around, were the name of the game, along with a flat roof, asbestos all over the place as was typical of its day and – as I was always told – a design life of 25 years. I guess we should consider ourselves lucky that it lasted around twice that long, but it has been getting less and less satisfactory for a long time, with poor air circulation, asbestos being discovered in unforeseen places every time any modification was made, and endless leaks. I well remember a visit from William Waldegrave in the early 1990s, then in charge of science as Chancellor of the Duchy of Lancaster, when we were told we had to remove the buckets that caught the leaks. Whether this was so that he didn’t fall over them or because it made us look tatty, I’m not sure, but at least it wasn’t raining during the visit.

However, to the second piece of reading, and the real stimulus for this post…..There are other issues that I hope are factored in for the design of Cavendish III – and I write this from a position of ignorance, as I have deliberately kept well away from any discussions about the building as plans have evolved, given that I will not be working in it. Has enough money been set aside for running the programmes that the building will house, to maintain the boring infrastructure that is so critical for cutting edge science?

Given that ‘full economic costing’ means anything but that, it is important that sufficient money is in place to keep the building in a fit state over the decades, or at least the next five or ten years. For instance, to take a specific problem I remember featuring regularly in the days I chaired the department’s Finance Committee, a huge amount of liquid helium is used by the low temperature researchers, and maintaining a liquefier and piping helium around the building doesn’t come cheap, particularly if leaks appear after a while. It is very hard to work out how to charge equitably (including in intergenerational terms in the sense of putting money by for future needs) for maintaining this infrastructure. Many more examples could be given.

The Innovation Delusion by Lee Vinsel and Andrew Russell, argues strongly that shiny new things that aren’t maintained end up being a major problem. The authors’ focus is as much on civic infrastructure – drains, for instance – as on more high tech objects with which innovation is more commonly associated. Their message across the piece is the same: if you don’t maintain your latest large gizmo, car, infrastructure or whatever, you are storing up trouble. That, I fear, goes for buildings too. They are expensive to run and universities up and down the land – including Cambridge – have been too often caught out by obtaining money for a new building, but insufficient funds to provide the wherewithal to keep it, or the work inside, going for long. Maintenance, and those who do this, the ‘maintainers’, sit at the heart of this book, and it is a cautionary tale for academic administrators.

The Cavendish has very much been part of my past, even if the new building is not likely to be part of my future. However, I sincerely hope the designers have got it right for such a complex laboratory, and that the funds keep it in pristine shape for a long time to come.

Ten Tips to Make Sure You Get the Right WordPress Development Team | by Amy Parker | Jul, 2022